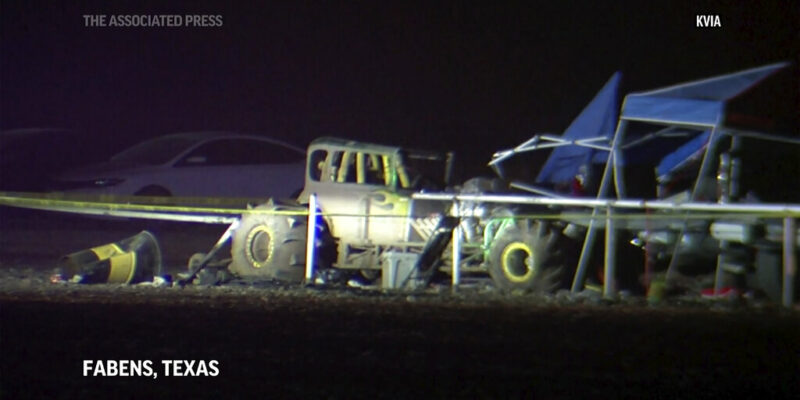 This image from a video, shows cars and tents after a vehicle plowed into a crowd at a mud racing event in Fabens, Texas, Monday, June 14, 2021. Several people were injured Sunday night after a vehicle left the mud track and crashed through a guard rail and into spectators. (KVIA via AP)

(AP) — Officials say a 21-year-old man was killed and seven other people were injured when a vehicle crashed through a guardrail and plowed into a crowd at a mud racing event in Texas.

The El Paso County Sheriff’s Department says the crash happened Sunday night at a racetrack in Fabens, about 40 miles southeast of El Paso. Authorities say eight people were taken to the hospital. They said Monday that Willie Valadez Ramirez was pronounced dead and two people remained in critical but stable condition.

The sheriff’s department says three other vehicles were also struck as a result of the initial crash. It was not immediately known what caused the vehicle to leave the track.