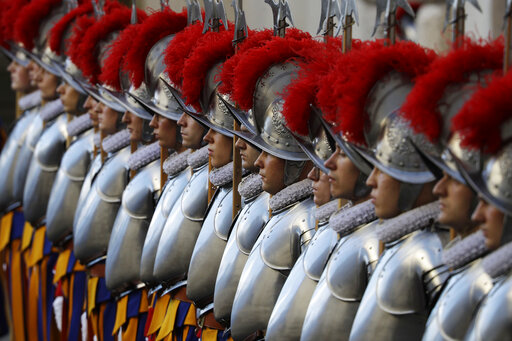 Vatican Swiss Guards stand attention at the St. Damaso courtyard on the occasion of the swearing-in ceremony at the Vatican, Sunday, Oct. 4, 2020. The ceremony is held to commemorate the day in 1527 when 147 Swiss Guards died protecting Pope Clement VII during the Sack of Rome. (AP Photo/Gregorio Borgia)

Despite the positive cases among his own guards, Pope Francis continued Monday to shun wearing a protective mask. He was seen warmly greeting Cardinal George Pell in his private studio, and neither man wore a mask. Also unmasked were Pell’s secretary and the Vatican photographer.