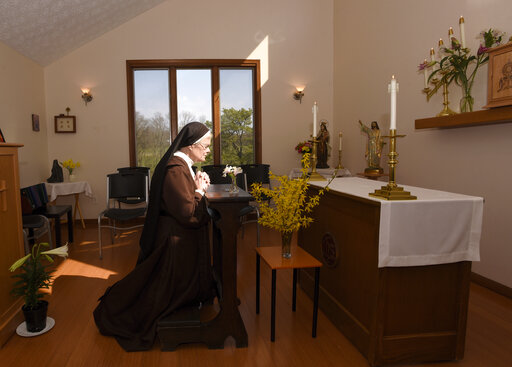 The Rev. Sister Barbara Smith, of the Order of Discalced Carmelites, prays on a prayer bench that belonged to The Rev. Mychal Judge, the Fire Department of New York's chaplain who died in the 2001 attacks on the World Trade Center, at the Episcopal Carmel of Saint Teresa in Rising Sun, Md., on Sunday, April 4, 2021. The Episcopal Carmel of Saint Teresa donated the prayer bench to the National Sept. 11 Memorial and Museum, representatives of which acquired the bench later in the morning. (AP Photo/Steve Ruark)

(AP) — A prayer bench used by a Fire Department chaplain killed in the collapse of the World Trade Center towers was driven to the New York area to join the collection of the Sept. 11 Memorial and Museum.

The bench formerly belonged to the Rev. Mychal Judge’s twin sister, Dympnia Jessich. It spent the last five years at an Episcopal monastery in Rising Sun, Maryland. Sept. 11 museum curator Amy Weinstein says the bench driven to the collection Sunday will be cataloged and added to the museum’s online database, where virtual visitors will be able to see it. It will be on physical display at some point.