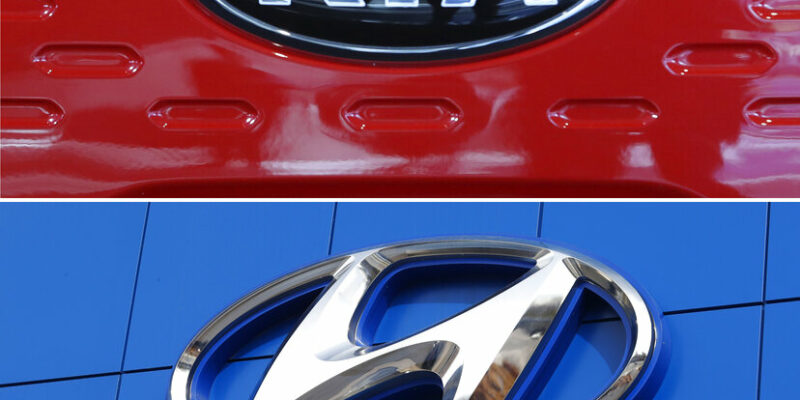 FILE- This combination of file photos shows the logo of Kia Motors during an unveiling ceremony on Dec. 13, 2017, in Seoul, South Korea, top, and Hyundai logo on the side of a showroom on April 15, 2018, in the south Denver suburb of Littleton, Colo., bottom. Hyundai and Kia will spend $137 million on fines and safety improvements because they moved too slowly to recall over 1 million U.S. vehicles with engines that can fail. The National Highway Traffic Safety Administration announced the penalties Friday, Nov. 27, 2020. (AP Photo, File)

(AP) — A week after being fined for delaying safety recalls, Hyundai says it will recall about 130,000 vehicles in the U.S. because the engines could fail. The recall covers certain 2012 Santa Fe SUVs, 2015 and 2016 Veloster cars, and Sonata Hybrid cars from 2011 through 2013, and 2016. Hyundai says the recall will address a manufacturing issue that could cause the connecting rod bearings to wear out and the engines to fail or catch fire. The recall stems from discussions in an investigation by the National Highway Traffic Safety Administration. Owners will be notified in late January. Dealers will replace the engine if the bearings are damaged. All of the vehicles will get a knock sensor system to monitor symptoms that come before an engine fails.