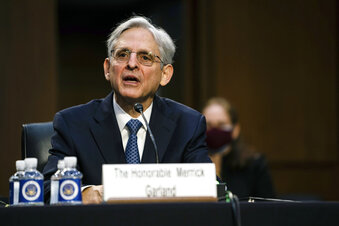 (AP) — Merrick Garland, President Joe Biden’s attorney general nominee is vowing to prioritize combating extremist violence and said his first focus would be on the insurrection at the U.S. Capitol as he sought to assure lawmakers that the Justice Department would remain politically independent on his watch. The federal appeals court judge was snubbed by Republicans for a seat on the Supreme Court in 2016. Garland appeared Monday before the Senate Judiciary Committee and is widely expected to sail through his confirmation process with bipartisan support. He says the “attorney general represents the public interest, particularly and specifically as defined by the Constitution and the statutes of the United States.” He pledged that he does “not plan to be interfered with by anyone.”