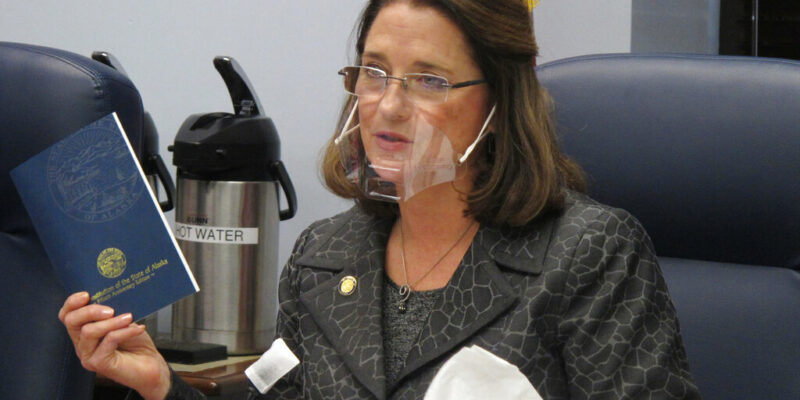 FILE - In this Jan. 27, 2021 file photo, Alaska state Sen. Lora Reinbold, an Eagle River Republican, holds a copy of the Alaska Constitution during a committee hearing in Juneau, Alaska. Alaska Airlines has banned the Alaska state senator for refusing to follow mask requirements. Last week Reinbold was recorded in Juneau International Airport arguing with Alaska Airlines staff about mask policies. A video posted to social media appears to show airline staff telling Reinbold her mask must cover her nose and mouth. Reinbold has been a vocal opponent to COVID-19 mitigation measures and has repeatedly objected to Alaska Airlines' mask policy, which was enacted before the federal government's mandate this year. (AP Photo/Becky Bohrer, File)

(AP) — Alaska Airlines has banned an Alaska state senator from its flights for refusing to follow mask requirements. An airline spokesman said Saturday that Republican Sen. Lora Reinbold, of Eagle River, had been informed and added the suspension was effective immediately.

Reinbold told the Anchorage Daily News that she had not been notified of a ban and that she hoped to be on an Alaska Airlines flight in the near future.

The ban comes after an incident last week at Juneau International Airport in which Reinbold was recorded apparently arguing with airport and Alaska Airlines staff about the mask policies. The federal government requires masks aboard aircraft.