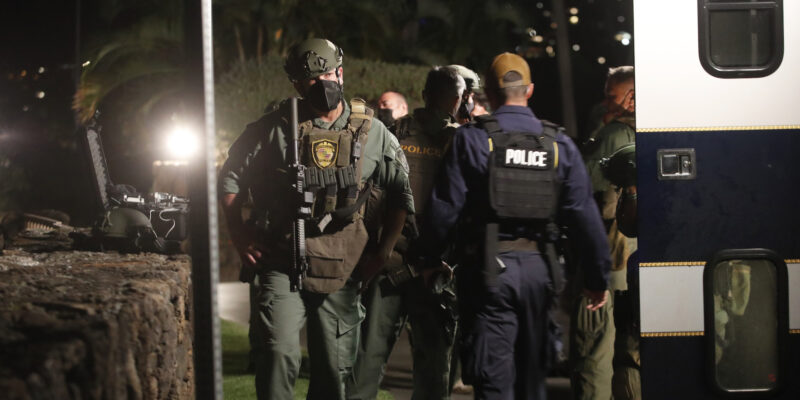 Members of the Honolulu Police Specialized Services Division respond to a barricade situation with an armed man at the Kahala Hotel in Honolulu on Saturday, April 10, 2021. The armed man barricaded himself inside a hotel room at the resort in Honolulu and fired shots through the door, a police official said. (Cindy Ellen Russell/Honolulu Star-Advertiser via AP)

(AP) — Police have responded late Saturday to a resort in Honolulu where an armed man barricaded inside a room and fired shots through the door. Police Capt. Brian Lynch told news outlets no one was hurt in the gunfire. A statement from The Kahala Hotel & Resort says hotel security and law enforcement evacuated the area around the room and everyone is sheltering in place. Photos and videos shared by local media show about 100 people locked down in the hotel’s ballroom. Other images from outside the resort show a large police presence, including a SWAT team. Lynch says police are waiting for the man to come out of the room.

Trump : The Key To Republican Success Is More Trumpism