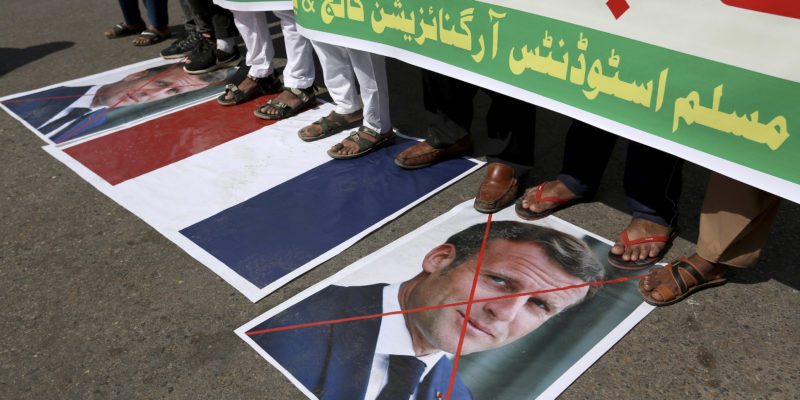 Supporters of the Muslims Students Organization stand on a representation of a French national flag and defaced images of French President Emmanuel Macron during a protest against the president and against the publishing of caricatures of the Prophet Muhammad they deem blasphemous, in Karachi, Pakistan, Friday, Oct. 30, 2020. Muslims have been calling for both protests and a boycott of French goods in response to France's stance on caricatures of Islam's most revered prophet. (AP Photo/Fareed Khan)

(AP) — Thousands of Muslims in Pakistan are joining anti-France protests, as the French president’s vow to protect the right to caricature the Prophet Muhammad continues to roil the Muslim world. More protests, largely organized by Islamists, are expected across the region, including Lebanon and the Gaza Strip. In Afghanistan, a member of an Islamist party warned the French president that insulting the prophet of Islam could ignite a third world war. The protests come amid rising tensions between France and Muslim-majority nations, which flared up earlier this month when a young Muslim beheaded a French schoolteacher who had shown caricatures of the Prophet Muhammad in class.

Valley Lawmaker To Make A Bid For Texas House Speaker