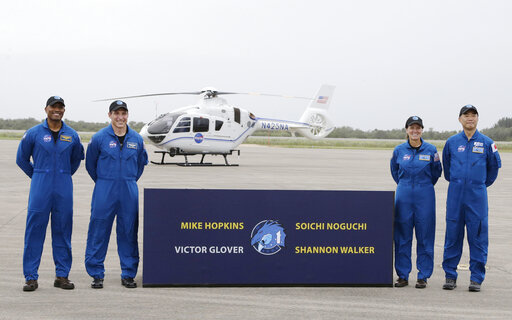 NASA Astronauts from left Victor Glover, Michael Hopkins, Shannon Walker and Japan Aerospace Exploration Agency Astronaut Soichi Noguchi pose for a photo during a news conference after they arrived at the Kennedy Space Center, Sunday, Nov. 8, 2020, in Cape Canaveral, Fla. The four astronauts will fly on the SpaceX Crew-1 mission to the International Space Station scheduled for launch on Nov. 14, 2020. (AP Photo/Terry Renna)

(AP) – Four astronauts have arrived at Florida’s Kennedy Space Center for SpaceX’s second crew launch next weekend. This time there are twice as many astronauts as the test flight earlier this year, and the mission will last for a full six months.

The three Americans and one Japanese astronaut flew into Kennedy from Houston on Sunday. They’re scheduled to rocket away Saturday night to the International Space Station.

For NASA, it marks the long-awaited start of regular crew rotations, with private companies providing the lifts. The astronauts have named their capsule Resilience given all the challenges of 2020.