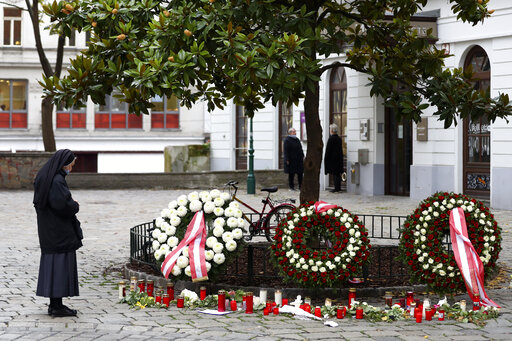 A nun stands at the crime scene besides wreaths and candles in Vienna, Austria, Wednesday, Nov. 4, 2020. Several shots were fired shortly after 8 p.m. local time on Monday, Nov. 2, in a lively street in the city center of Vienna. (AP Photo/Matthias Schrader)

(AP) – Austrian authorities say intelligence officials in Slovakia told their Austrian counterparts in July that the man who fatally shot four people in a terror attack in Vienna this week had tried to buy ammunition there.

Austria’s interior minister said Wednesday that mistakes apparently were made in dealing with that information. The suspect, identified as 20-year-old Kujtim Fejzulai, had a previous conviction for trying to join the Islamic State group in Syria and had been given early release in December. He wounded more than 20 people in nine minutes before he was killed by police on Monday night.