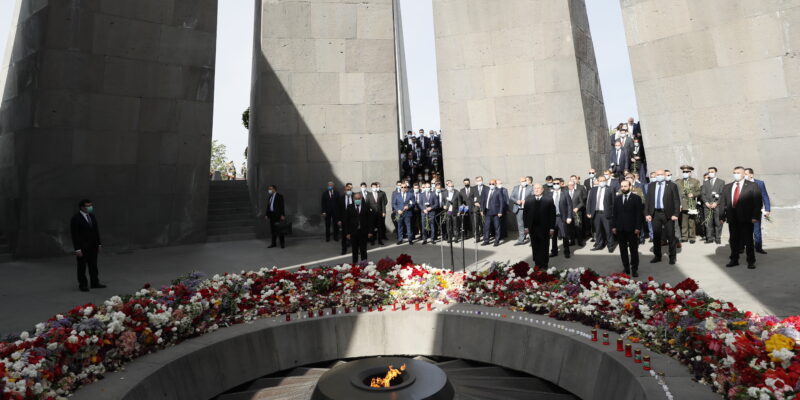 Armenian Prime Minister Nikol Pashinyan, center, attends a memorial service at the monument to the victims of mass killings by Ottoman Turks, to commemorate the 106th anniversary of the massacre, in Yerevan, Armenia, Saturday, April 24, 2021. Armenians marked the anniversary of the death of up to 1.5 million Armenians by Ottoman Turks, an event widely viewed by scholars as genocide, though Turkey refutes the claim. (Tigran Mehrabyan/PAN Photo via AP)

(AP) — President Joe Biden has formally recognized that the systematic killings and deportations of hundreds of thousands of Armenians by Ottoman Empire forces in the early 20th century were “genocide” — using a term for the atrocities that his White House predecessors have avoided for decades over concerns of alienating Turkey. With the acknowledgement, Biden followed through on a campaign promise he made a year ago to recognize that the events of 1915 to 1923 were a deliberate effort to wipe out Armenians. Biden used a presidential proclamation to make the pronouncement on Saturday, the annual commemoration of Armenian Genocide Remembrance Day.

1 Verdict, Then 6 Police Killings Across America In 24 hours