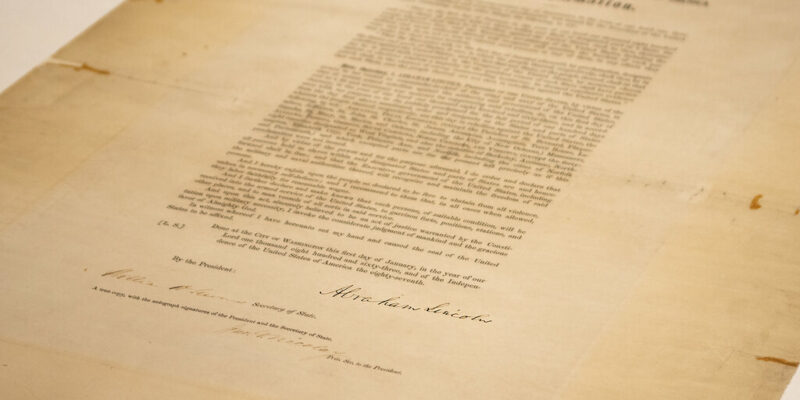 This updated handout photo provided by the Abraham Lincoln Presidential Library and Museum on Tuesday, June 8, 2021 shows a signed copy of Emancipation Proclamation. The Library, in Springfield, Ill., will mark Juneteenth, the holiday commemorating the end of slavery in the United States, by displaying the rare signed copy of the Emancipation Proclamation. The copy of the proclamation that's signed by Lincoln and Secretary of State William Seward will be displayed between June 15 and July 6. The original document is kept in the National Archives in Washington, D.C. (Abraham Lincoln Presidential Library and Museum photo via AP)

Juneteenth is now a federal holiday. President Biden signed legislation creating the holiday during a ceremony at the White House. Juneteenth marks the actual end of slavery in the U.S., more than two years after the Emancipation Proclamation.

Vice President Harris called Juneteenth a day of pride and a day of action in the ongoing struggle to achieve racial equality in the U.S. She noted that enslaved people helped build the White House. Harris said, “We have come far and we have far to go.”

The legislation was passed by the House and Senate with unusual speed this week. The Juneteenth National Independence Day is the first new federal holiday that has been created in decades.

The Latest: CDC: Delta Variant Expected To Be Dominant In US