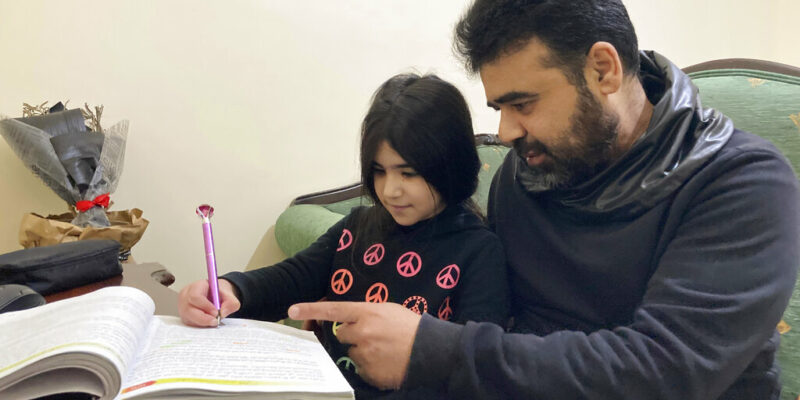 Syrian refugee Mahmoud Mansour, 47, helps his youngest daughter Sahar, 8, with her homework at his rented apartment in Amman, Jordan, Wednesday, Jan. 20, 2021. President Joe Biden has vowed to restore America's place as a world leader in offering sanctuary to the oppressed by raising the cap on the number of refugees allowed in each year. Mansour's family had completed the work to go to the United States when the Trump administration issued its travel ban barring people from Syria indefinitely and suspending the refugee program for 120 days. (AP Photo/Omar Akour)

(AP) — President Joe Biden is using a visit to the State Department to underscore his promise to restore a broader approach to U.S. foreign policy and reengage with the international community. White House press secretary Jen Psaki says Biden will thank Foreign Service officers and civil servants “who are the heart and soul” of the agency. Thursday’s trip is set to come in conjunction with a number of policy announcements meant to restore the nation’s place on the global stage. Officials say Biden plans to announce that he will increase the cap on the number of refugees allowed into the United States to more than eight times the level under President Donald Trump.

Businesses Face Hard Decisions On Whether, When To Hire