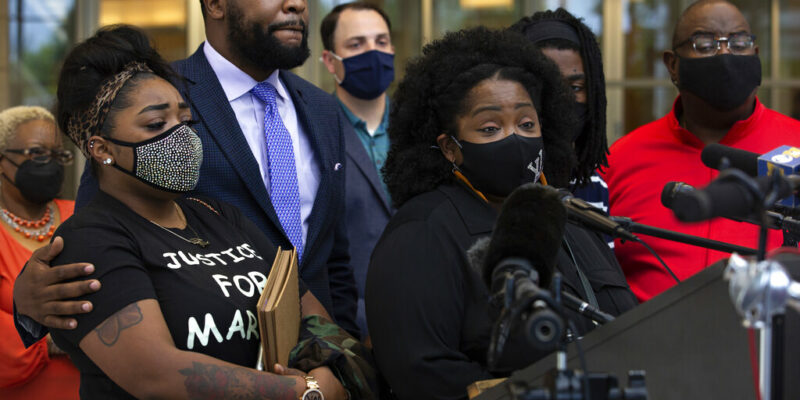 LaSandra Scott speaks during a news conference concerning updates on her son Marvin Scott III's in-custody death at the Collin County Courthouse in McKinney, Texas on Wednesday, April 28, 2021. The death of Scott who struggled with detention officers at the Texas jail during what his family members say probably was a mental health crisis has been ruled a homicide. (Shelby Tauber/The Dallas Morning News via AP)

(AP) — The death of a Black man who struggled with detention officers at a Texas jail during what his family members say probably was a mental health crisis has been ruled a homicide.

The Collin County Medical Examiner said Wednesday that Marvin Scott III died last month of “fatal acute stress response” during the struggle with jailers who were trying to restrain him. The medical examiner says Scott was previously diagnosed with schizophrenia.

Scott’s family viewed video from inside the jail of Scott’s last moments and is calling for the arrests of the jailers involved. So far, seven jailers have been fired, though one of them was reinstated. An attorney representing six of the jailers says there is no evidence of any misconduct in Scott’s death.