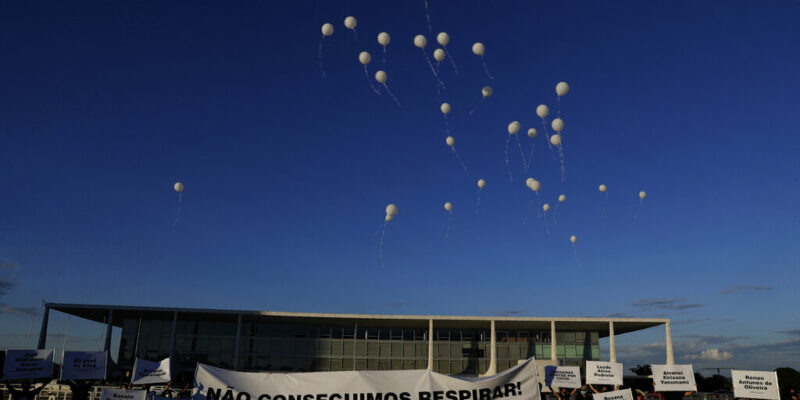 Demonstrators open a large banner with text written in Portuguese that reads "We can't breathe" while releasing white balloons representing the more than 200,000 deaths caused by the COVID-19 pandemic, during a protest against the lack of action to combat the new Coronavirus by the administration of Brazil's President Jair Bolsonaro, in front of the presidential palace, in Brasilia, Brazil, Thursday, Jan. 21, 2021. (AP Photo/Eraldo Peres)

(AP) — Brazil’s government is eagerly awaiting the Friday arrival of 2 million doses of coronavirus vaccine from India. The announcement shipment as public health experts are sounding the alarm over insufficient supply in South America’s biggest nation.

Neither the government’s Fiocruz Institute nor Sao Paulo state’s Butantan Institute have yet received the technology from their partners to produce vaccines domestically and instead must import the active ingredient.

There are only about 10 million doses available at the moment, and Brazil’s government is estimated to need that many just to cover front-line health workers in the nation of 210 million people.