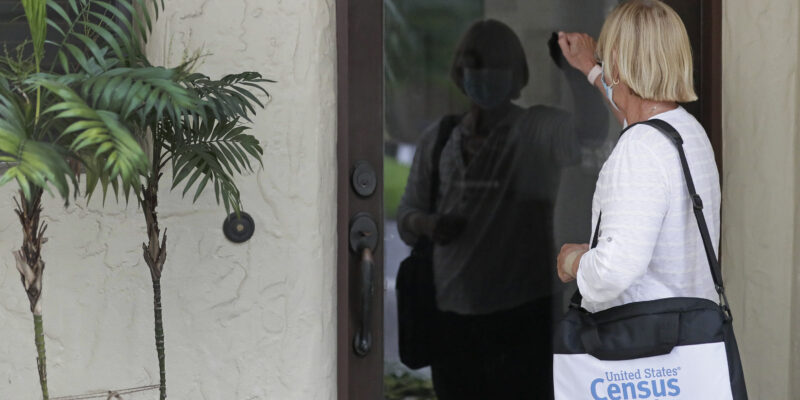 FILE - In this Aug. 11, 2020, file photo, a census taker knocks on the door of a residence in Winter Park, Fla. The congressional committee that oversees the Census Bureau issued a subpoena Thursday, Dec. 10, 2020, to U.S. Commerce Secretary Wilbur Ross for documents related to data irregularities that are putting in jeopardy a year-end deadline for turning in numbers used for divvying up congressional seats. Democrat U.S. Rep. Carolyn Maloney is the chair of the House Committee on Oversight and Reform. (AP Photo/John Raoux, File)

(AP) – A federal judge has rejected an emergency request from the Trump administration that would stop it from being immediately forced to release documents showing how the 2020 census numbers have been crunched in the weeks since the U.S. head count ended in October. U.S. District Judge Lucy Koh said in her ruling late Sunday that “time is of the essence.” She dismissed the claims of government attorneys who said they had no way of meeting her court-ordered deadline without releasing all 88,000 documents a search has produced, with no time to review and redact confidential information.