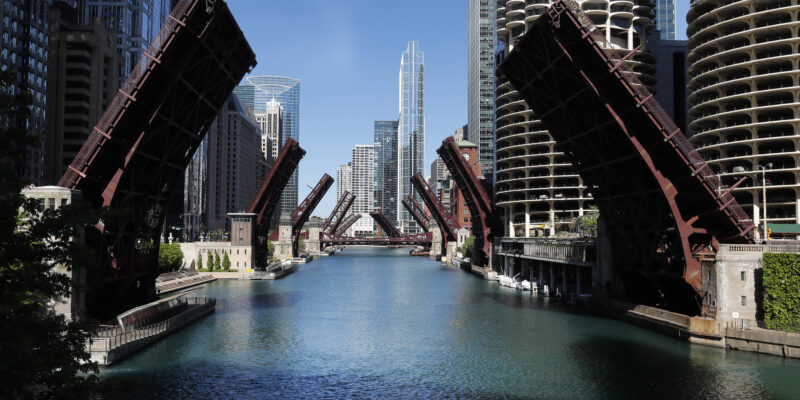 FILE - In this May 31, 2020 file photo, several street bridges over the Chicago River remain closed in Chicago, after a night of unrest and protests over the death of George Floyd, a black man who was in police custody in Minneapolis. The year 2020 ended in Chicago with more homicides than in all but one year in more than two decades. As in other cities, Chicago police attribute much of the increase in gun violence to the global coronavirus pandemic and civil unrest that erupted after Floyd died after being forcibly detained by Minneapolis police.  (AP Photo/Charles Rex Arbogast)

(AP) — The year 2020 ended in Chicago with more homicides than in all but one year in more than two decades. Police on Friday reported that there were 769 homicides compared with 495 in 2019. The surge in the number of homicides and shootings comes after three straight years in which the totals have fallen after climbing to 784 in 2016. Other cities around the U.S. also saw increased violence in 2019. Law enforcement officials and experts around the U.S. have pointed to social and economic upheaval caused by the coronavirus and public sentiment toward policing following the death of George Floyd in Minneapolis as contributing factors.

Some Mexicans Struggle To Get Oxygen Amid Virus Case Surge