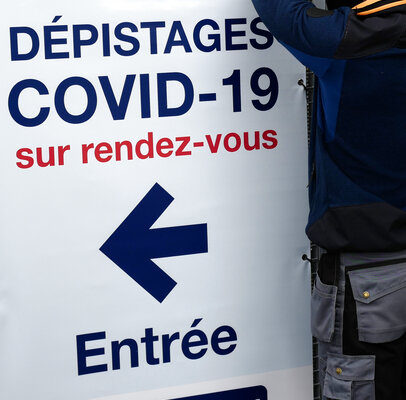 A man puts up a poster for COVID-19 testing at Lille Zenith Arena in Lille, northern France, Thursday, Oct. 15, 2020. French President Emmanuel Macron has announced that millions of French citizens in several regions around the country, including in Paris, will have to respect a 9pm curfew from this Saturday until Dec. 1. It's a new measure aimed at curbing the resurgent coronavirus amid second wave. (AP Photo/Michel Spingler)

(AP)–French restaurants, cinemas and theaters are trying to figure out how to survive a new curfew aimed at stemming the flow of record new virus infections.

France registered more than 30,000 virus cases Thursday, its highest single-day jump since the pandemic began, and nearly 200 cases per 100,000 people over the past week.

Culture Minister Roselyne Bachelot told Le Parisien newspaper she is negotiating for exceptions to a monthlong curfew between 9 p.m. and 6 a.m. across the Paris region and eight other metropolitan areas. The curfew comes into effect Friday at midnight, and France is deploying 12,000 extra police to enforce it.