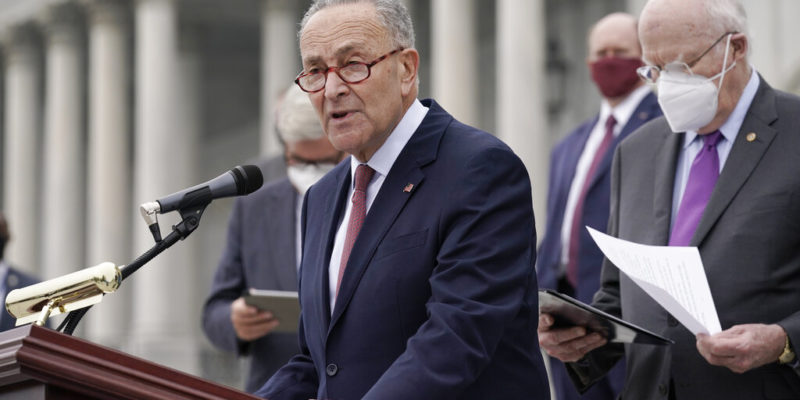 Senate Minority Leader Chuck Schumer, D-N.Y., and Democratic members of the Senate Judiciary Committee hold a news conference after boycotting the vote by the Republican-led panel to advance the nomination of Judge Amy Coney Barrett to sit on the Supreme Court, Thursday, Oct. 22, 2020, at the Capitol in Washington. (AP Photo/J. Scott Applewhite)

(AP) — A deeply torn Senate is set to confirm Amy Coney Barrett to the Supreme Court. Republicans are overpowering unified Democratic opposition to vote Monday on President Donald Trump’s nominee a week before Election Day. Democratic leaders want Vice President Mike Pence to stay away after his aides tested positive for COVID-19. Pence’s tie-breaking vote is not expected to be needed. Pence has not said if he plans to preside, as is customary. Democrats tell Pence it’s “not a risk worth taking.” With no real power to stop the vote, Democrats argue the winner of the Nov. 3 election should choose the nominee to replace the late Justice Ruth Bader Ginsburg.