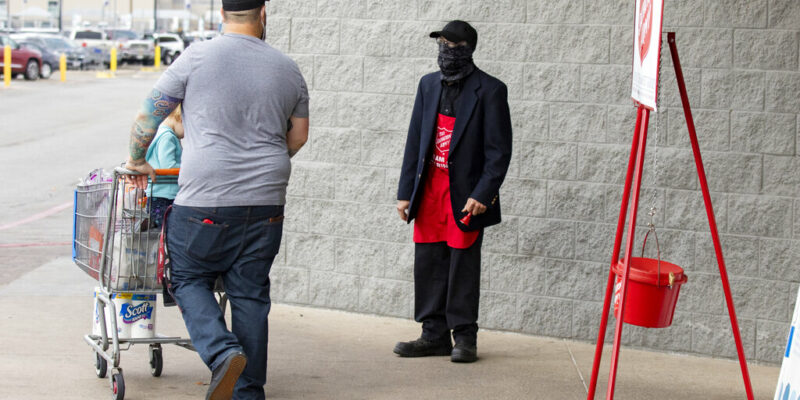 The Salvation Army's bell ringer Lonnie Fraley, center, rings a bell to raise funds for The Salvation Army as a customer leaves Walmart on 42nd Street and John Ben Shepperd Parkway Monday, Nov. 23, 2020, in Odessa, Texas. Fraley said this is his first year being a bell ringer. (Jacob Ford/Odessa American via AP)

(AP) — The top elected official for El Paso County, Texas, is announcing a new curfew to help combat the spread of the coronavirus, which is overrunning the area’s hospitals and funeral homes. County Judge Ricardo Samaniego says the curfew would go into effect on Wednesday and would run from 10 p.m. to 5 a.m. The curfew would end on Monday. Samaniego says Gov. Greg Abbott’s office has approved the curfew. Earlier Tuesday, Abbott announced the state has established a wing at an alternate care site set up in El Paso’s convention center to administer a new antibody drug that may help clear the coronavirus sooner and possibly cut hospitalizations in people with mild to moderate COVID-19.

Barack Obama To Be Honored Next Month By PEN America