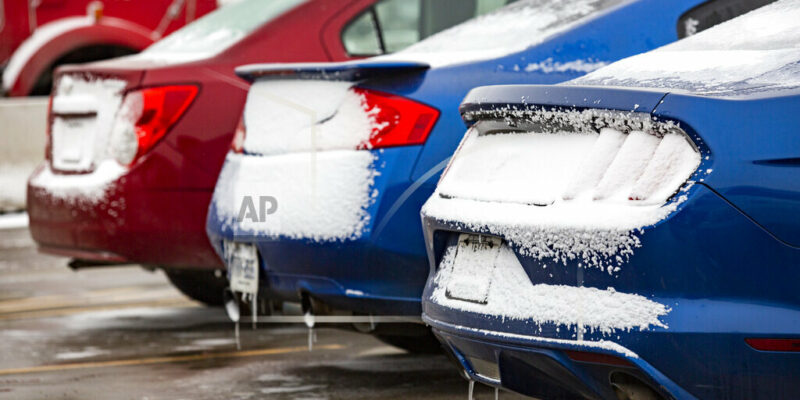 Vehicles dowsed in snow are parked in the parking lot off Mose Avenue Friday, Feb. 12, 2021, in Odessa, Texas. Friday is the second day the Permian Basin has seen freezing weather as a Winter Weather Advisory issued by the National Weather Service for the region remains in effect until 11 a.m. Saturday. (Jacob Ford/Odessa American via AP)

The Electric Reliability Council of Texas has initiated rotating power outages as the entire state deals with a winter storm that’s dropping snow, ice, and temperatures. The group that manages the state’s power grid says the outages will last 30 minutes to an hour. The directive was issued late last night and ERCOT is continuing to urge all Texans to reduce their electricity use as temperatures drop below freezing across the state, including the Rio Grande Valley. ERCOT says it is seeing record-breaking demand, along with some power generation outages such as limited natural gas supplies and frozen wind turbines. Ways you can cut back on your electricity use include setting the thermostat at 68 degrees, not using large appliances like washers and dryers, dishwashers, and ovens, also turning off lights you’re not using, and closing window shades and blinds.