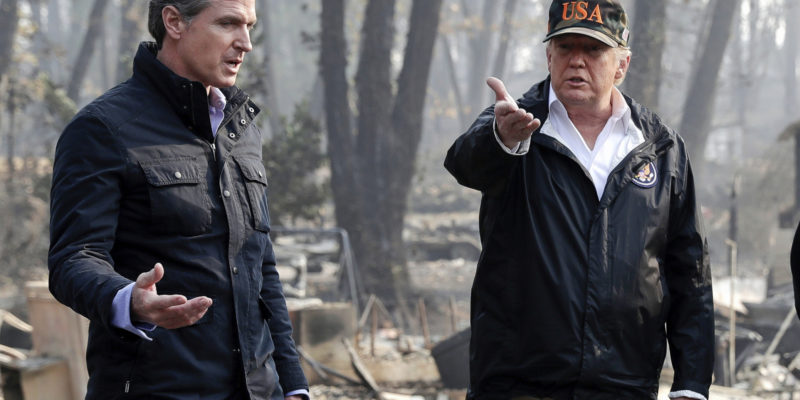 FILE - In this Nov. 17, 2018, file photo, President Donald Trump talks with then California Gov.-elect Gavin Newsom, left, during a visit to a neighborhood impacted by the wildfires in Paradise, Calif. Nearly two years ago President Trump ordered the U.S. Forest Service and the Department of Interior to make federal lands less susceptible to catastrophic wildfires. But the agencies fell short of his goals in 2019, treating a combined 4.3 million acres — just over half of the 8.45 million acres the president sought. It was only slightly better than their average annual performance over nearly two decades, according to government data. (AP Photo/Evan Vucci, File)

Federal agencies have fallen short of President Donald Trump’s goals for making forests and rangelands they oversee less vulnerable to wildfires. Trump set targets in 2018 for measures such as removing dead trees, underbrush and other potentially flammable materials. But government data shows the U.S. Forest Service and the Department of Interior treated just over half of the area the president sought. It was only slightly better than their average annual performance over nearly two decades. Trump has blamed poor state forest management practices for the worsening problem of catastrophic fires in the U.S. West.

Trump Pitches ‘Back To Normal’ As Biden Warns Of Tough Days