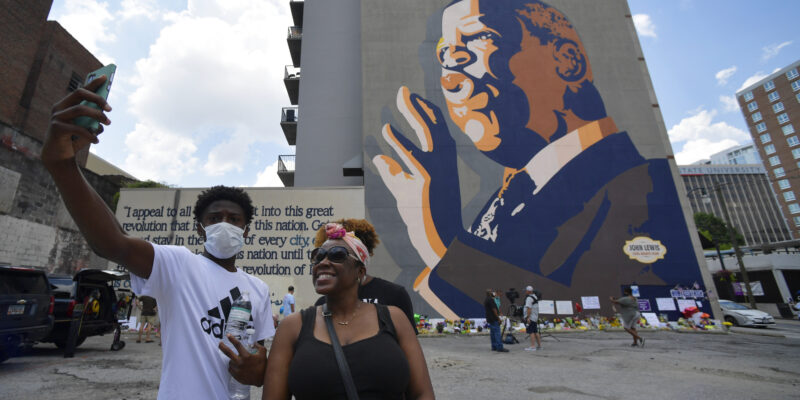 FILE - In this July 19, 2020, file photo, people gather at a makeshift memorial near the home of Rep. John Lewis, D-Ga., in Atlanta. Lewis, who died Friday at age 80, was the youngest and last survivor of the Big Six civil rights activists who organized the 1963 March on Washington, and spoke shortly before the group's leader, Rev. Martin Luther King Jr., gave his "I Have a Dream" speech to a vast sea of people. (AP Photo/Mike Stewart)

In a year defined by a devastating pandemic, the world lost iconic defenders of civil rights, great athletes and entertainers who helped define their genres. U.S. Supreme Court Justice Ruth Bader Ginsburg was one of the many beloved figures who died in 2020. The world also said goodbye to U.S. Rep. John Lewis, a lion of the civil rights movement. Basketball great Kobe Bryant died in a January helicopter crash at age 41, actor Chadwick Boseman died of cancer in August at age 43, and soccer great Diego Maradona died in November at age 60. The year also claimed guitar virtuoso Eddie Van Halen and actor Sean Connery.

As End Approaches, Trump Gets Doses Of Flattery, Finality