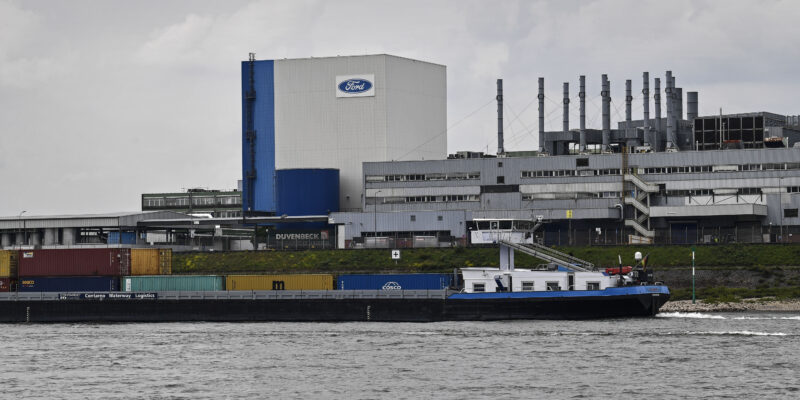 FILE - In this May 4, 2020 file photo, a container ship passes the Ford car plant in Cologne, Germany, as the US car maker restarts the production after the coronavirus lockdown. Ford says it will spend $1 billion to modernize its Cologne, Germany, manufacturing center, converting it into a European electric vehicle factory. (AP Photo/Martin Meissner)

(AP) — Ford announced a major push into electric vehicles in Europe, vowing to convert its entire passenger car lineup on the continent to electrics by 2030. Ford will spend $1 billion to revamp its factory in Cologne, Germany and make it a base for production of zero local emission cars using Volkswagen’s mechanical framework, said Stuart Rowley, president of Ford of Europe, during an online news conference Wednesday. The new electric car is to reach the market in mid-2023, and could be followed by a second one there in the future. The agreement  lets Ford take advantage of Volkswagen’s massive investment in electric cars as the industry shifts toward zero-local emissions vehicles.

Mexico Suffers Another Day Of Rolling Blackouts Due To Storm