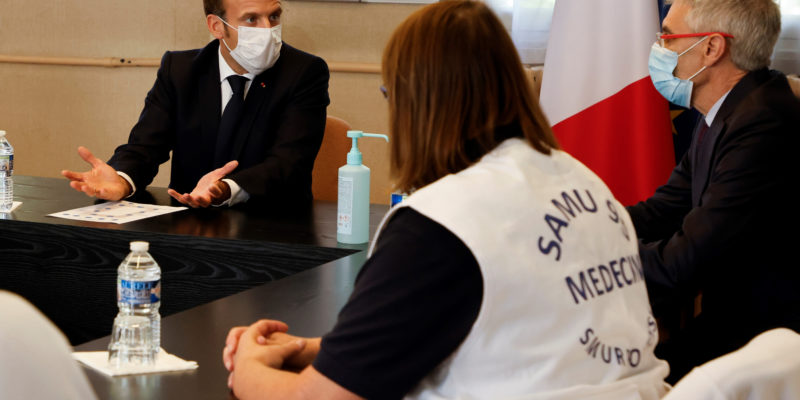 French President Emmanuel Macron, left, chairs a meeting with the medical staff of the Rene Dubos hospital center, in Pontoise, outside Paris, Friday Oct. 23, 2020. French Prime Minister Jean Castex said Thursday a vast extension of the nightly curfew that is intended to curb the spiraling spread of the coronavirus, saying "the second wave is here." The curfew imposed in eight regions of France last week, including Paris and its suburbs, is being extended to 38 more regions and Polynesia, (Photo by Ludovic Marin, Pool via AP)

French President Emmanuel Macron called on citizens to respect a nightly curfew and other measures to fight the rapid spread of the coronavirus. Coronavirus patients are occupying more than 42% of ICU beds nationally and 64% in the Paris region.

The government announced a six-week curfew from 9 p.m. to 6 a.m. in 46 regions and Polynesia. France more than 34,200 deaths, the fourth-highest death toll in Europe behind Britain, Italy and Spain.