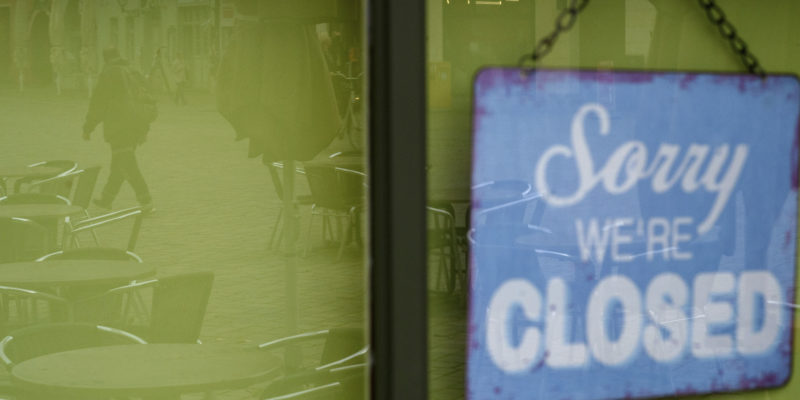 "Sorry we re closed" is written on a sign hanging on the door of a coffee shop where the unoccupied tables and chairs are reflected in the glass pane in Quedlinburg, Germany, Monday, Nov.2, 2020. Since midnight the four-week partial lockdown has been in effect in Saxony-Anhalt. The federal and state governments want to significantly reduce social contacts in Germany in November in order to get a grip on the recently rapidly increasing corona numbers before the Advent season if possible. (Klaus-Dietmar Gabbert/dpa via AP)

(AP) — Germany has became the latest European country to embark on a partial shutdown as authorities across the continent scramble to flatten a rapid rise in coronavirus infections that threatens to overwhelm health systems. In parts of Europe, the new restrictions — which vary in strictness — are prompting sometimes violent protests by people frustrated at once again having to forgo freedoms. And the prospect of a second lockdown is causing discontent even in Britain’s governing party. In Germany, restaurants, bars, theaters, cinemas, gyms and other leisure facilities shut their doors on Monday. The a four-week “wave-breaker” shutdown is meant to force virus infections back down to manageable levels.

Bruised And Haunted, US Holds Tight As 2020 Campaigns Close