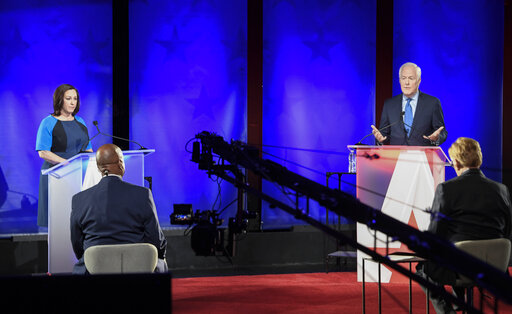 Republican U.S. Sen. John Cornyn, of Texas, back right, speaks during a debate with MJ Hegar, of Round Rock (Bob Daemmrich/Nexstar/KXAN via AP, Pool)

Cornyn said in the run-up to Tuesday’s election that he expected to prevail but also predicted a single-digit finish, six years after coasting to his last reelection in Texas by 27 points. His vulnerability underscored the unusual trouble Republicans up and down the ballot are suddenly confronting in America’s biggest red state.

Still, Hegar faced daunting odds, not the least of which was because a Democrat hasn’t won a Senate race in Texas in more than 30 years.