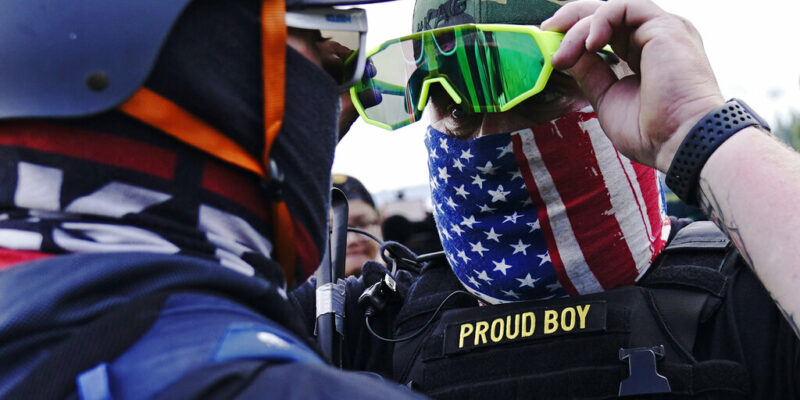 FILE - In this Sept. 26, 2020, file photo, member of the Proud Boys, right, stands in front of a counter protester as members of the Proud Boys and other right-wing demonstrators rally, in Portland. In its annual report set to be released Monday, Feb. 1, 2021, the Southern Poverty Law Center said it identified 838 active hate groups operating across the U.S. in 2020. (AP Photo/John Locher, File)

(AP)–The Southern Poverty Law Center, an Alabama-based organization that tracks racism and xenophobia, says it identified 838 active hate groups operating across the U.S. in 2020. That’s a decrease from the 940 documented in 2019 and the record-high 1,020 in 2018, according to an annual report the law center released Monday.

The number of white nationalist groups saw a noticeable decline after posting huge growth during the previous two years, as in-person organizing was hampered by the coronavirus pandemic. But the law center’s president said the decrease in active hate groups should not be interpreted as a decline of hate and bigotry in America.

Pandemic’s Deadliest Month In US Ends With Signs Of Progress