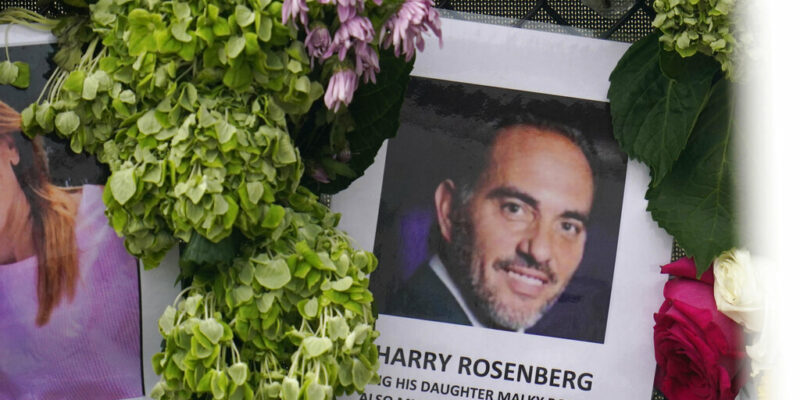 FILE - In this June 29, 2021, file photo, an image of Harry Rosenberg, missing since an oceanfront condo building collapsed in Surfside, Fla., hangs on a fence as part of a makeshift memorial. After losing his wife to cancer and his parents to COVID-19, Rosenberg’s new home came with the promise of a fresh start. His daughter, Malky Weisz. and her husband, Benny Weisz, had just arrived for a visit and are also missing. (AP Photo/Gerald Herbert, File)

(AP) — A New York City man bought a beachfront condo in Florida to start a new chapter of his life after his wife and parents died. Now Harry Rosenberg is missing in the rubble of the building in Surfside, along with his daughter and her husband, who were visiting for the Sabbath.

The 52-year-old asset manager had recently moved into Champlain Towers South following the loss of his wife to cancer and his parents to COVID-19.

Rosenberg’s new home came with the promise of a fresh start. The cascading tragedies are reminders of the toll the collapse has taken on many families after what was already a grief-filled year.

BC Heat Wave Kills Over 230