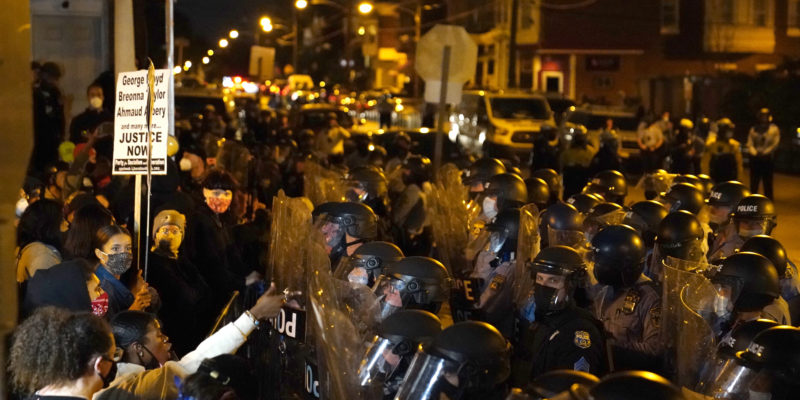 Protesters confront police during a march, Tuesday Oct. 27, 2020, in Philadelphia. Hundreds of demonstrators marched in West Philadelphia over the death of Walter Wallace, a Black man who was killed by police in Philadelphia on Monday. Police shot and killed the 27-year-old on a Philadelphia street after yelling at him to drop his knife. (AP Photo/Matt Slocum)

(AP) – A night of peaceful protests in Philadelphia gave way to more unrest and some demonstrators clashed with police after a Black man was killed by police officers in a shooting caught on video. About 500 people angered by the death of 27-year-old Walter Wallace Jr. on Tuesday night marched to a police station, where they were met by officers with riot shields.

Police say some of the demonstrators threw debris at officers, and two were injured. There were sporadic reports of arrests in other areas and video showed people streaming into stores and stealing goods as they left on the opposite side of the city from where Wallace was shot.