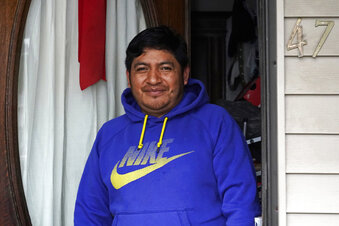 Lucio Perez poses in the front doorway of his home, where he has lived with his family since March, Thursday, July 8, 2021, in Springfield, Mass. Just a few months ago, Perez moved out of a western Massachusetts church he'd lived in for more than three years to avoid deportation. Immigration authorities in March granted the 37-year-old Guatemalan national a temporary stay in his deportation while he argued to have his immigration case reconsidered. (AP Photo/Charles Krupa)

(AP) — A recent Supreme Court ruling has given some immigrants renewed hope that they can have their deportation cancelled because they didn’t receive proper notice of the court proceedings. The high court ruled in April that federal immigration officials have not been providing all the required information in their deportation hearing notices. The agency typically sends out the notices in two parts: the initial notice and then another notice with the court date. But the court ruled all information should be contained in a single note under federal law. Immigration lawyers and advocates say the decision could impact thousands of deportation cases going back years.