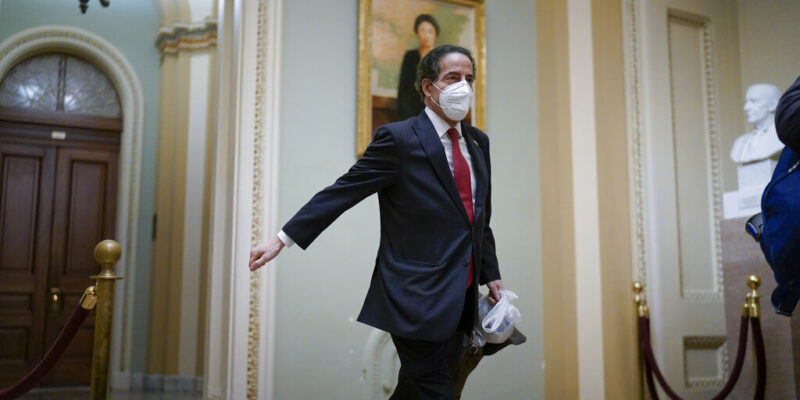 Rep. Jamie Raskin, D-Md., the lead manager in the second impeachment trial of former President Donald Trump, departs at the close of the first day of the proceeding, at the Capitol in Washington, Tuesday, Feb. 9, 2021. Trump was charged by the House with incitement of insurrection for his role in agitating a violent mob of his supporters that laid siege to the U.S. Capitol on Jan. 6, sending members of Congress into hiding as the Electoral College met to validate President Joe Biden's victory. (AP Photo/J. Scott Applewhite)

House impeachment managers are again laying out their case against former President Trump in his Senate trial. Maryland Democrat Jamie Raskin said the insurrectionists who invaded the Capitol were following Trump’s “marching orders.”

Trump led a huge rally near the White House before the Capitol attack on January 6th. Colorado Democrat Diana DeGette recalled being stuck in the House gallery on that day as members of an angry mob pounded on the main door of the House chamber. She said, “Donald Trump had sent them there.”

DeGette’s presentation included more video clips of the Capitol assault. She said the rioters believed they were “following orders from the commander in chief.” DeGette argued the mob was intent on stopping the congressional ratification of the presidential election. That process was interrupted, but ultimately completed.

Officials: Chauvin Was Ready To Plead To 3rd-Degree Murder