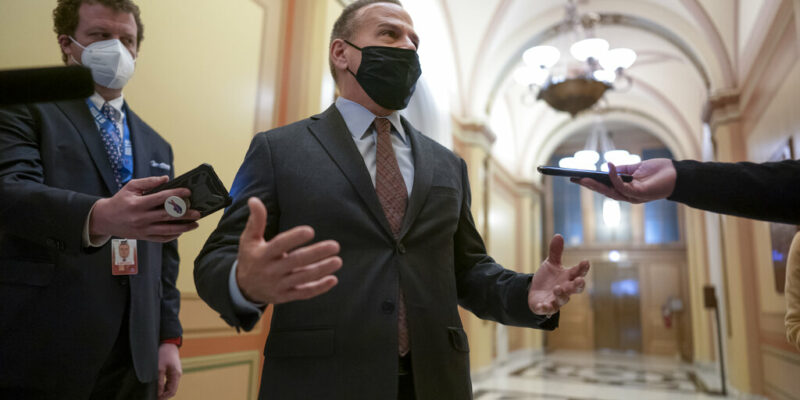 Rep. David Cicilline, D-R.I., talks to reporters just outside the House chamber after a resolution calling for the removal of President Donald Trump from office was blocked by Republicans, at the Capitol in Washington, Monday, Jan. 11, 2021. House Speaker Nancy Pelosi, D-Calif., is calling for congressional action to rein in President Donald Trump after inciting last week's deadly assault on the U.S. Capitol. (AP Photo/J. Scott Applewhite)

(AP) — With impeachment pressure mounting, the House is speeding ahead to try to oust President Donald Trump from office.

Democrats are pushing first for the vice president and Cabinet to invoke constitutional authority to remove Trump from office. After that, impeachment proceedings are set for Wednesday. Biden said those who “engaged in sedition” must be held accountable.

Trump is to face a single charge — “incitement of insurrection” — over the deadly riot at the U.S. Capitol. The FBI is warning of more unrest ahead of Inauguration Day. Speaker Nancy Pelosi says the House will proceed with legislation to impeach Trump if Pence doesn’t help. Trump is set to leave Jan. 20 when Democrat Joe Biden is inaugurated.