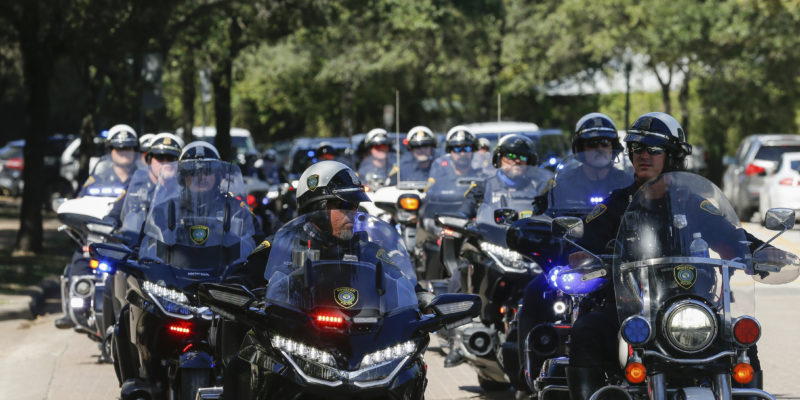 Houston Police officers escort the body of Sgt. Harold Preston from Memorial Hermann Hospital to the medical examiner's office, Tuesday, Oct. 20, 2020, in Houston. Two officers were shot by a suspect during a domestic violence call at an apartment complex Tuesday. The other officer Courtney Waller was shot in the arm and is in stable condition at a hospital. ( Godofredo A. Vásquez/Houston Chronicle via AP)

A Houston police officer is dead after being shot at an apartment complex on Holly Hall near El Rio. Mayor Sylvester Turner says 65-year-old Sergeant Harold Preston died Tuesday morning, just two-weeks before he was to retire.

The suspect, identified as 51-year-old Elmer Manzano, is hospitalized with a gunshot wound and is expected to be charged with murder.

Governor Greg Abbott issued a statement saying Preston’s death is a reminder of the bravery of police officers. He called for prayers for Preston’s family, and for Officer Courtney Waller, who was shot in the arm at the same crime scene.