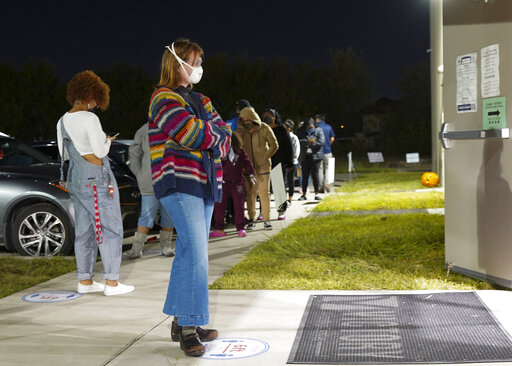 Aubrey Calaway, 23, waits to vote in the general election outside Victory Houston polling station in Houston on Friday, Oct. 30, 2020. The location was one of the Harris County's 24-hour locations. (Elizabeth Conley/Houston Chronicle via AP)

(AP) – The most populous county in Texas is making a concerted effort to increase voter turnout by offering eight 24-hour polling places.

The event launched Thursday night with a drive-in concert by Houston rapper Bun B and other artists at a parking lot near one of the sites at NRG Arena. Harris County Clerk Chris Hollins says he hopes other counties will “follow our lead and offer a night of 24-hour voting to support their voters.”