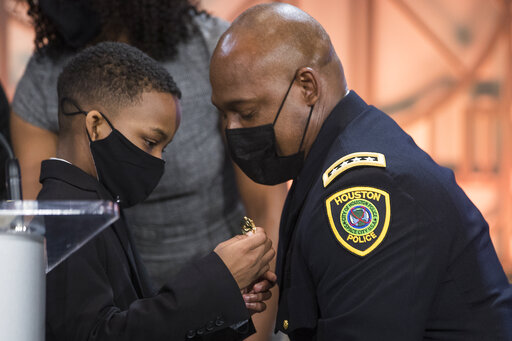 Houston Police Chief Wyatt Finner, left, pins the chief's badge on the uniform of his dad, new Houston Police Chief Troy Finner, during a ceremony at City Hall Monday, April 5, 2021, in Houston. Finner is a 54-year-old veteran who hails from Fifth Ward and attended Madison High School in Houston. He formally takes the reins of the police department, the same day that outgoing Chief Art Acevedo is sworn in as chief in Miami. (Brett Coomer/Houston Chronicle via AP)

(AP) — Houston’s newest police chief has been sworn in during a ceremony in which he asked residents in the nation’s fourth-largest city for their help in bringing down rising crime, including a 37% increase in homicides.

Troy Finner officially took the reins Monday of a 5,300-officer police force. Like others across the U.S., the Houston Police Department has seen a rise in violent crime over the past year during the pandemic.

Finner succeeds Art Acevedo, who earlier Monday was sworn in as chief of the smaller Miami police force. Finner was executive assistant chief under Acevedo. He says he’s ready for the challenge of his new job.

Some Businesses Want Masks On, Even As States Drop Mandates