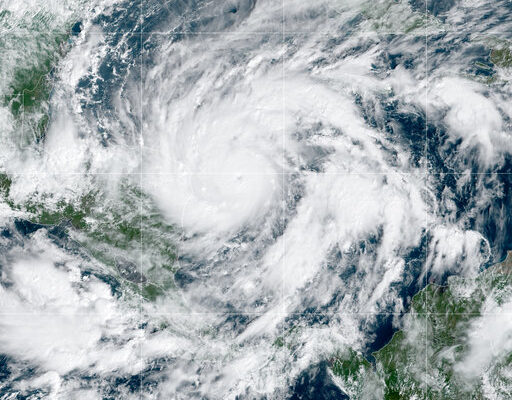 This GeoColor satellite image taken Monday, Nov. 2, 2020, at 1 p.m. EDT, and provided by NOAA, shows Hurricane Etna in the Gulf of Mexico approaching the border of Honduras and Nicaragua. New Hurricane Eta quickly gained force Monday as it headed for Central America on the verge of becoming a major hurricane, threatening massive flooding and landslides across a vulnerable region. (NOAA via AP)

(AP) – New Hurricane Eta is quickly gaining force as it heads for Central America, threatening massive flooding and landslides across a vulnerable region.

Eta had maximum sustained winds of 90 mph (150 kph) early Monday and it was located about 140 miles (225 kilometers) east of the Nicaragua-Honduras border, according to the National Hurricane Center. It was moving west at 10 mph (17 kph).

Forecasters say the storm could strengthen further and become a major hurricane before running ashore by early Tuesday, likely in Nicaragua, where it could bring rains measured in feet rather than inches.