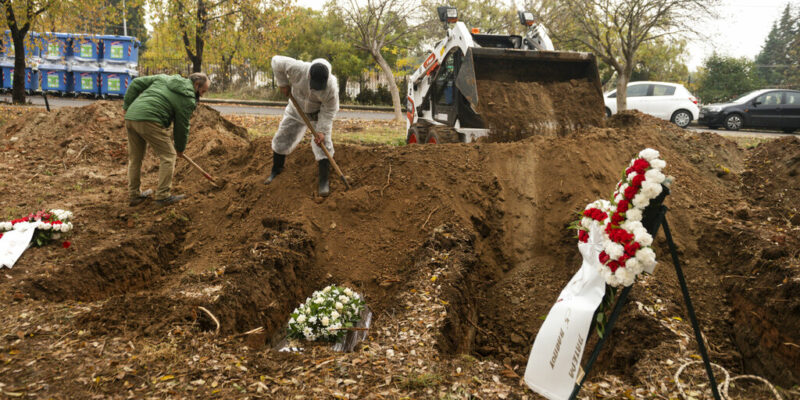 Workers shovel soil over a coffin during a funeral ceremony for a person who died of COVID-19, in the northern city of Thessaloniki, Greece, Saturday, Dec. 5, 2020. In Greece's second-largest city, Thessaloniki, victims of the pandemic are buried in quarantined sections of two cemeteries, angering many relatives already heartbroken that their loved ones died with no or little family contact. (AP Photo/Giannis Papanikos)

(AP) — COVID-19 victims endure harrowing isolation before and after death in Thessaloniki, the city in Greece most acutely affected by the pandemic. Under rules set by city authorities, people who were infected with the virus must be buried in segregated plots at two local cerimetries.

One woman couldn’t see her 84-year-old mother at either the nursing home where she first became ill or the hospital where she spent several weeks. She then had to identify her at the morgue from a distance. She says “people are dying with no one there for them, like dogs.”

While the burial regulations add to the grief of survivors, some health experts question if they serve an actual public health purpose.

Bodies Pile Up At Crematorium In Germany’s Virus Hot Spot