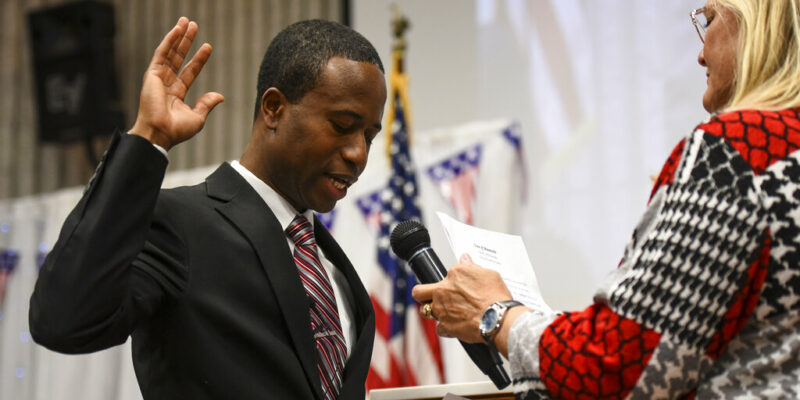 Mike Elliott takes the oath of office as the city's new mayor with city clerk Barb Suciu, right, during Elliot's inauguration ceremony, Wednesday, Jan. 2, 2019, at the Brooklyn Center Community Center, in Brooklyn Center, Minn. Elliott is the city's first Black and first Liberian American mayor. Elliott, who emigrated from Liberia as a child, is finding just how difficult it is to turn the page on the nation’s racial history as he handles the fallout from a police shooting. (Aaron Lavinsky/Star Tribune via AP)

Mike Elliott is among many who celebrated his election as mayor of Brooklyn Center as the beginning of a new era. The inner-ring Minneapolis suburb is one of the most racially diverse places in the state and would for the first time be led by a person of color. A little more than two years later, Elliott is finding out just how difficult it is to turn the page on the nation’s racial history. The shooting of Daunte Wright, a Black man, by a white police officer has set off protests, political upheaval and painful reckoning about racism and representation in his small city.

Expert Says Cop Was Justified In Pinning Down George Floyd