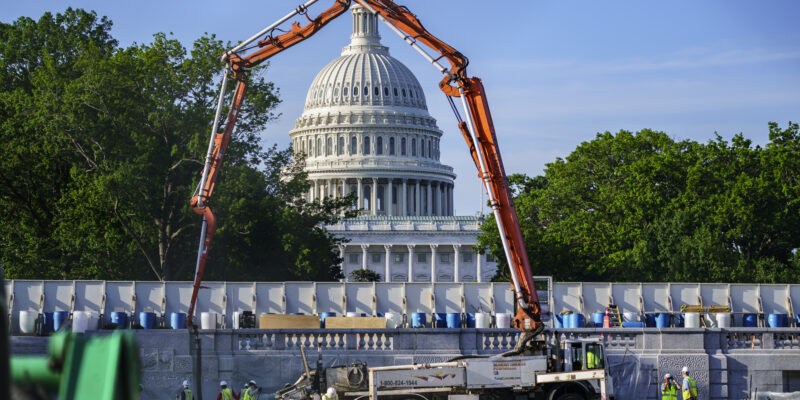 A concrete pump frames the Capitol Dome during renovations and repairs to Lower Senate Park on Capitol Hill in Washington, Tuesday, May 18, 2021. President Joe Biden hopes to pass a massive national infrastructure plan by this summer but Democrats and Republicans in Congress appear divided over his proposal for $2.3 trillion in spending to upgrade the nation's crumbling infrastructure. (AP Photo/J. Scott Applewhite)

(AP) — Prospects for a vast infrastructure deal have been thrown into serious doubt. The White House has reduced President Joe Biden’s sweeping proposal to $1.7 trillion, but Republican senators are rejecting the compromise as disappointing, saying “vast differences” remain. White House Press Secretary Jen Psaki disclosed the new offer as Cabinet secretaries and GOP senators were negotiating. Skepticism had been rising on all sides amid complaints about the lack of significant movement off the opening bids. Republicans had offered a $568 billion plan. The president’s team had set a soft Memorial Day deadline to determine whether a deal was within reach.

Mississippi’s Last Abortion Clinic At Center Of US Debate