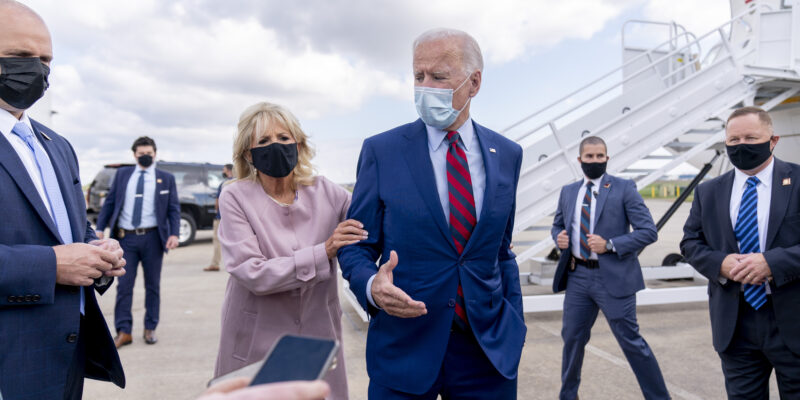 FILE - In this Oct. 5, 2020 file photo, Jill Biden moves her husband, Democratic presidential candidate former Vice President Joe Biden, back from members of the media as he speaks outside his campaign plane at New Castle Airport in New Castle, Del., to travel to Miami for campaign events. Protecting Joe stands out among Jill Biden's many roles over their 43-year marriage, as her husband's career moved him from the Senate to the presidential campaign trail and the White House as President Barack Obama's vice president. She's a wife, mother, grandmother and educator with a doctoral degree — as well as a noted prankster who will soon be putting her own stamp on what it means to be first lady. (AP Photo/Andrew Harnik, File)

(AP) — It’ll soon be time for Jill Biden to put her own stamp on what it means to be first lady. She’s had eight years watching the role up close during the two terms of Barack Obama, when Joe Biden served as vice president. For starters, Jill Biden plans to continue her career as a college professor, and that will be a first for the spouse of a sitting president. She’s known for her fierce protective streak for her husband, and she has a reputation as a prankster, too. In 2004, when Joe Biden and advisers were discussing whether he should run for president that year, she wrote “No” on her stomach and marched through their meeting in a bikini.

Faith Takes The Forefront As Georgia Senate Runoffs Heat Up