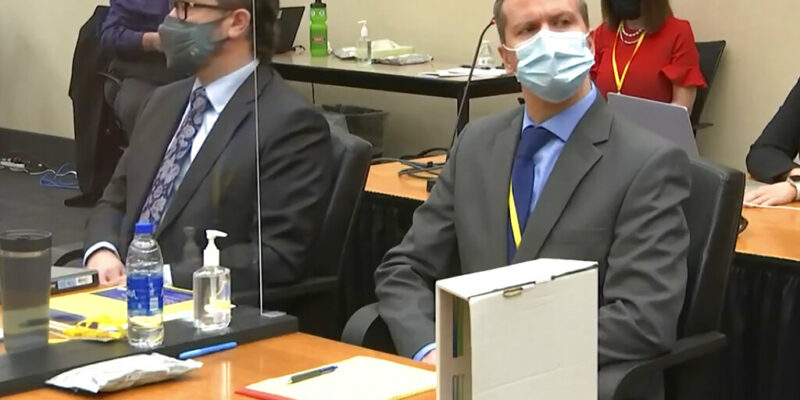 In this image from video, defense attorney Eric Nelson, left, and former Minneapolis police officer Derek Chauvin listen as Hennepin County Judge Peter Cahill presides over pre-trial motions prior to opening statements, Monday March 29, 2021, in the trial of Chauvin, in the May 25, 2020, death of George Floyd at the Hennepin County Courthouse in Minneapolis, Minn. (Court TV via AP, Pool)

(AP) — Shocking video footage of George Floyd gasping for breath was front and center Monday as the former Minneapolis police officer who pressed his knee into the Black man’s neck went on trial Monday on charges of murder and manslaughter.

Prosecutors played the video that shows Derek Chauvin kneeling on George Floyd’s neck for 9 minutes, 29 seconds as the Black man pleaded for his life and went limp. Prosecutor Jerry Blackwell told jurors that Chauvin “didn’t let up, he didn’t get up” even after Floyd said 27 times that he couldn’t breathe and went motionless.

The defense says it’ll show that Chauvin reacted exactly as he was trained and that drugs played a role in Floyd’s death. The widely seen video sparked waves of outrage across the U.S. and beyond.