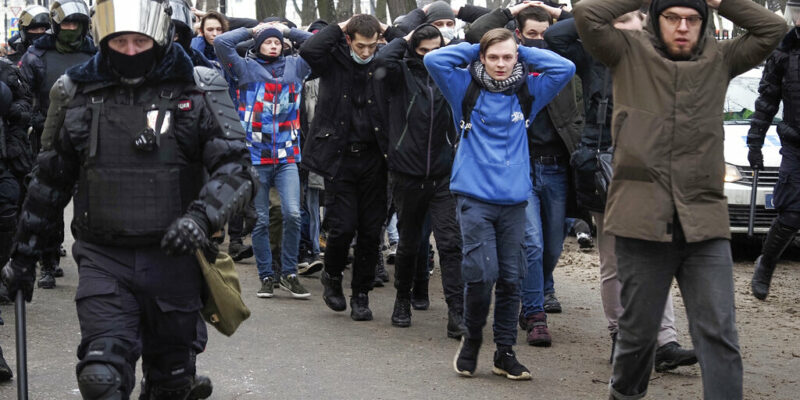 FILE - In this Sunday, Jan. 31, 2021 file photo, detained protesters walk escorted by police during a protest against the jailing of opposition leader Alexei Navalny in St. Petersburg, Russia. A prison sentence for Navalny and a sweeping crackdown on protesters demanding his release reflect the Kremlin’s steely determination to fend off threats to its political monopoly at any cost. (AP Photo/Dmitri Lovetsky, File)

(AP) — The Kremlin said Thursday that thousands of arrests at protests against the jailing of Russian opposition leader Alexei Navalny were a necessary response to the unsanctioned rallies and strongly rebuffed Western criticism. Asked about the harsh treatment of thousands of detainees, who spent many hours on police buses and were put in overcrowded cells, Russian President Vladimir Putin’s spokesman, Dmitry Peskov, said that they have to bear responsibility for joining the unsanctioned protests. Protests erupted after Navalny was arrested following his return from Germany where he was convalescing from a nerve-agent attack he blamed on the Kremlin. A Moscow court on Tuesday sentenced Navalny to two years and eight months in prison.

Biden To Visit State Dept. As US Reengages With Its Allies