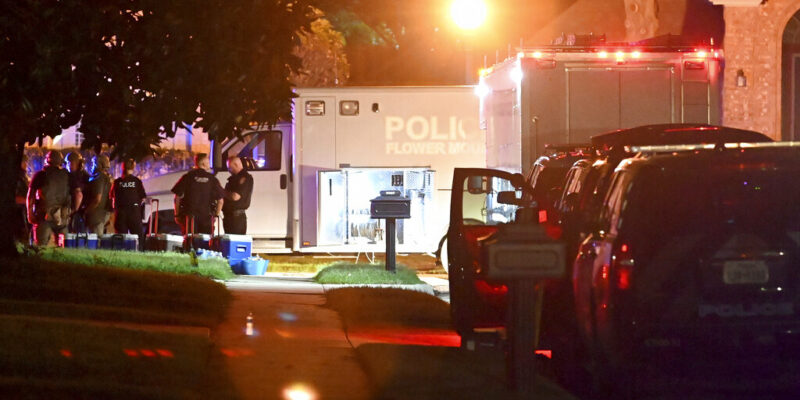 Police officers stand near the scene where three officers were shot in the 2900 block of Termaine Drive, late Wednesday, May 26, 2021, in Flower Mound, Texas. The officers were shot while responding to a suicidal call, according to authorities. (Matt Strasen/The Dallas Morning News via AP)

(AP) — Authorities say three police officers escaped major injury after they were fired upon by a man during a standoff at a home in a Dallas suburb.

Flower Mound police officers were responding to a call of a suicidal person when the 60-year-old man opened fire on them late Wednesday. Police Chief Andy Kancel says the officers were wearing protective gear that prevented major injury. The police chief says the man surrendered at about 5:30 a.m. Thursday after a SWAT team fired tear gas into the home.

Kancel says one officer was struck by fragments, one was injured by glass after a bullet struck a ballistic shield and one was shot in the chest, but armor prevented major injury.

Killer Of 9 In California Had Talked Of Workplace Attacks