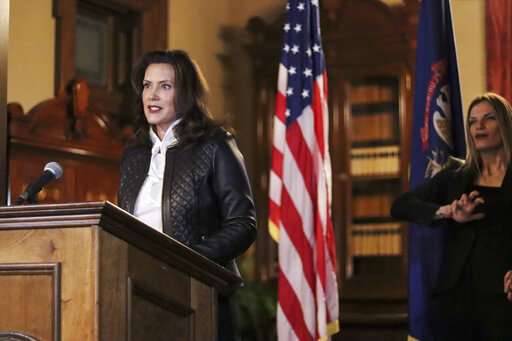 In a photo provided by the Michigan Office of the Governor, Michigan Gov. Gretchen Whitmer addresses the state during a speech in Lansing, Mich., Thursday, Oct. 8, 2020. The governor delivered remarks addressing Michiganders after the Michigan Attorney General, Michigan State Police, U.S. Department of Justice, and FBI announced state and federal charges against 13 members of two militia groups who were preparing to kidnap and possibly kill the governor. (Michigan Office of the Governor via AP)

(AP) – Michigan Gov. Gretchen Whitmer says governors from both major political parties have reached out to her to share stories of extremism in their states.

Whitmer says she was targeted by “domestic terrorists” in a kidnapping plot that was foiled by federal agents. Whitmer says extremism isn’t unique to Michigan.

The governor says Republicans and Democrats need to “take it on.” Authorities announced Thursday that they had stopped a scheme to kidnap Whitmer. The government says it involved months of planning and even rehearsals to snatch her from her vacation home.