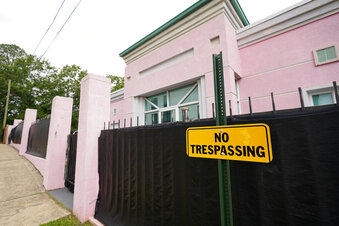 FILE - In this May 19, 2021, file photo, the Jackson Women's Health Organization clinic, more commonly known as "The Pink House," is shrouded with a black tarp so that its clients may enter in privacy in Jackson, Miss. The Mississippi attorney general’s office is expected to file briefs with the U.S. Supreme Court on Thursday to outline the state’s arguments in a case that could upend nearly 50 years of court rulings on abortion rights nationwide. (AP Photo/Rogelio V. Solis, File)

(AP) — The Mississippi attorney general’s office is expected to file briefs with the U.S. Supreme Court to outline the state’s arguments in a case that could affect abortion rights nationwide. A 6-3 conservative majority, with three justices appointed by former President Donald Trump, said in May that the court would hear arguments later this year over a Mississippi law that would ban abortion at 15 weeks. The case challenges nearly 50 years of rulings that have prohibited states from restricting abortion before a fetus can survive outside the womb. Mississippi attorneys have a Thursday deadline to file briefs. Justices are likely to hear the case this fall.