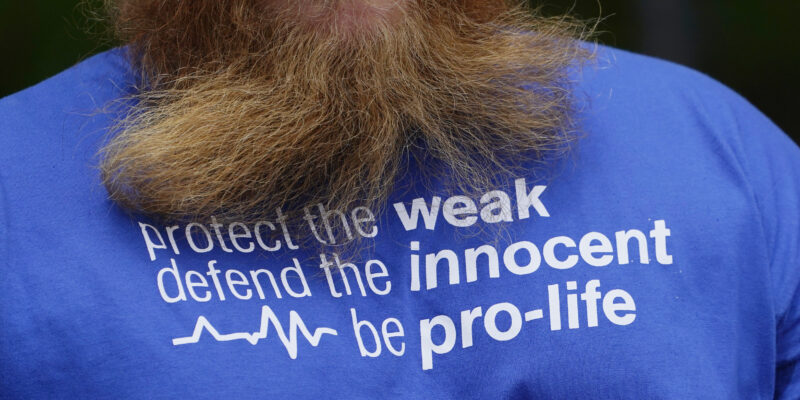 A anti-abortion advocate's t-shirt proclaims his sentiments as he and others set up outside the Jackson Womens Health Organization clinic, Thursday, May 20, 2021, in Jackson, Miss. The clinic is Mississippi's only state licensed abortion facility. On May 17, 2021, the U.S. Supreme Court agreed to take up the dispute over a Mississippi ban on abortions after 15 weeks of pregnancy. The issue is the first test of limits on abortion access to go before the conservative majority high court. Their decision could mean more restrictions, and focuses on the landmark 1973 ruling in Roe v. Wade, which established a woman's right to an abortion. (AP Photo/Rogelio V. Solis)

(AP) — Protesters yell and wave signs outside Mississippi’s only abortion clinic on the three or four days it is open each week. The clinic director cannot find Mississippi doctors willing to work there, so physicians fly in from out of state. Mississippi legislators have been trying for years to limit access to abortion. The U.S. Supreme Court will consider arguments later this year over a Mississippi law that would ban most abortions after 15 weeks. It is one of many restrictive laws from conservative states — all aimed at overturning the 1973 Supreme Court ruling that legalized abortion across the U.S.

As US Schools Resume Testing, Large Numbers Are Opting Out