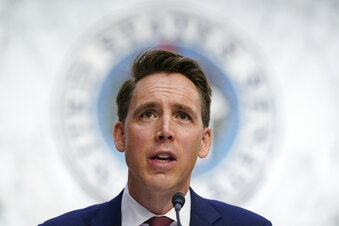 FILE - In this Oct. 12, 2020, file photo Sen. Josh Hawley, R-Mo., speaks during a confirmation hearing for Supreme Court nominee Amy Coney Barrett before the Senate Judiciary Committee on Capitol Hill in Washington. Hawley, says he will raise objections next week when the Congress meets to affirm President-elect Joe Biden’s victory in the election, forcing House and Senate votes that are likely to delay — but in no way alter — the final certification of Biden's win.(AP Photo/Susan Walsh, Pool, File)

(AP) — A Republican senator says he’ll object when Congress meets next week to certify President-elect Joe Biden’s victory in the election. Sen. Josh Hawley of Missouri says he’ll protest the Electoral College certification because “some states, including notably Pennsylvania” didn’t follow their election laws. Hawley isn’t giving specifics or evidence in the statement he released announcing his intentions. Hawley’s move is likely to force votes in the House and Senate that would delay the certification of Biden’s win, but not change the outcome. House Speaker Nancy Pelosi says she has “no doubt” that Biden will be confirmed by the Congress as the 46th president of the United States.