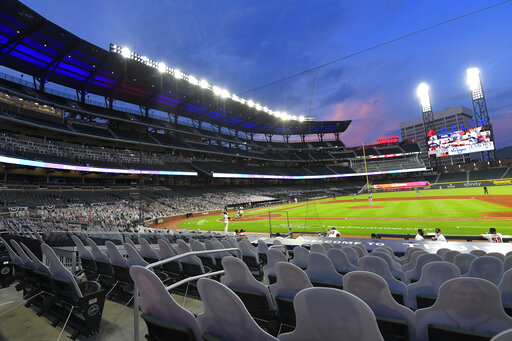 FILE - Cardboard cutouts of fans in the otherwise empty seats face the field during the sixth inning of a baseball game between the Atlanta Braves and Tampa Bay Rays in Atlanta, in this Thursday, July 30, 2020, file photo. Georgia’s new voting law _ which critics claim severely limits access to the ballot box, especially for people of color _ has prompted calls from as high as the White House to consider moving the midsummer classic out of Atlanta. The game is set for July 13 at Truist Park, the Braves’ 41,000-seat stadium in suburban Cobb County.(AP Photo/John Amis, File)

A Georgia tourism official says Major League Baseball’s decision to pull the All-Star Game from Atlanta will have a 100-million dollar impact.

Baseball Commissioner Rob Manfred announced Friday that the All-Star game and draft won’t be held in Atlanta, in response to a new law critics say will make it harder to vote.

Holly Quilan is CEO and president of Cobb Travel and Tourism. She said losing revenue for the eight-thousand Atlanta-area hotel rooms contracted to Major League Baseball will hurt the hospitality industry and other local businesses.