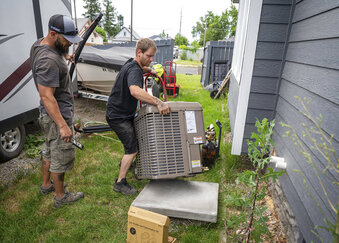 Carl Rocha, left, and Patrick Plummer, with Bills Heating & A/C Install air conditioning and a new furnace at a home on East Wabash Street, Wednesday, June 23, 2021, in Spokane, Wash. With temperatures forecast to hit over 100 degrees by Sunday, a rush of customers are keeping local A/C installers busy. (Colin Mulvany/The Spokesman-Review via AP)

(AP) — About a dozen deaths in Washington and Oregon may be tied to an intense heat wave that brought scorching temperatures to the Northwest and has caused one power utility to impose rolling blackouts amid heavy demand. The dangerous weather that gave Seattle and Portland consecutive days of record high temperatures exceeding 100 degrees Fahrenheit eased in those cities on Tuesday. But inland Spokane saw temperatures spike. The National Weather Service said the 109 F on Tuesday in Spokane was the highest temperature ever recorded there. About 9,300 Avista Utilities customers in Spokane lost power on Monday and the company said more planned blackouts began on Tuesday afternoon.